Took the opportunity to right some wrongs the other day when I did the cover art for the Judge Dredd Megazine 328 graphic novel; Ratfink. I did the covers for the first printing of the story in the Meg several years ago, and they were bloody atrocious - so I was glad Tharg let me do something new... 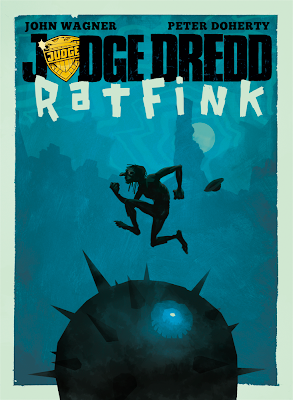 I was gonna go with an unused bit of art I did at the same time as the first lot of covers, just updating it a little bit, so started re-doing the pizen ball, then changed my mind and used it as the basis for the new picture above. Pretty much the only thing that survived was the texture and the border! It was orange like the original painting to start with, but I decided to go with a more muted palette to match Pete Doherty's strip art. His colours are always fabulous, really natural, so it seemed stupid to stick a REALLY REALLY ORANGE bit of art on the front. Hence the blue!
Below are the original unused cover, the orange version of the above, and the final image without coverlines and logos. I dropped the skyline down fairly shortly after altering the colour, cos the sun and rocks and stuff got wiped out by the logos. 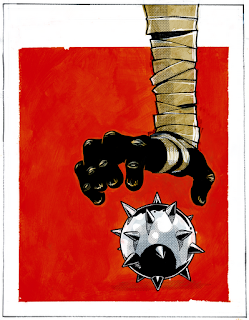 On the subject of Ratfink, Pete Doherty has posted some of his sketches for the character on his blog. Check it out HERE
Posted by Pye at 14:17