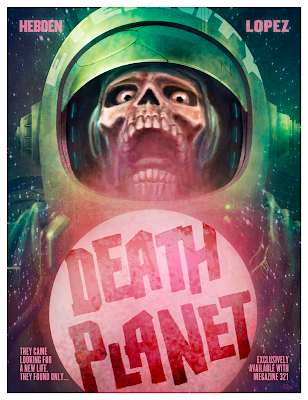 DEATH PLANET! This is a cover I finished today for the graphic novel that gets bagged with the Megazine each month. Next issue it's reprinting DEATH PLANET (it needs to be written in caps) by Alan Hebden and Lopez, and as it never had a cover when originally printed Tharg asked asked me to draw one. His brief was something like 'a planet dripping blood' but I went to town and made it look like an old video nasty instead. I have to admit it doesn't have much to do with the strip itself, but it's a pretty cool image. I came up with the crappy tagline myself, so this will almost certainly get ditched on the print job. Below are a couple of rough I did beforehand. 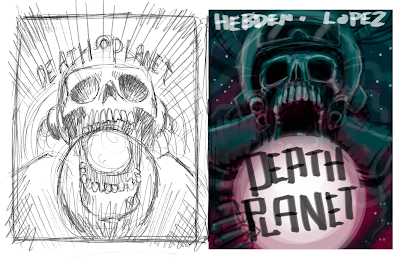 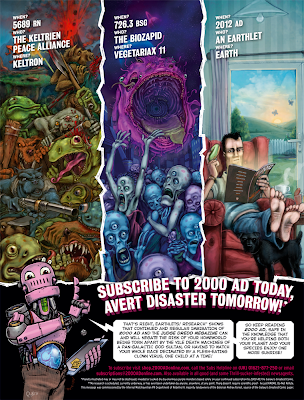 Ages ago Robo-k33f and I came up up with a fun idea for a subscriptions advert in 2000 AD that would read more like a propaganda poster than a sales pitch, involving whole planets getting leveled and blown up for daring to cancel their weekly Prog.
I think Tharg kind of liked the idea, so I came up with something a bit more concrete one afternoon, complete with ridiculous small-print and condescending tone. Unfortunately actually doing the art and getting it finished proved a little harder to fit in, but after a few months of putting it off it was printed in the Prog 2012 Christmas special. It'll also get tweaked a little bit to run in the special Free Comic Book Day 2000 AD issue in the US.
Below is the art without stuff on, and below that my pencils.

Frogmen vs. Dogmen! This is something I've wanted to draw for ages, for no reason other than it would be violent, and cool. It's a titanic struggle of the ages that my dog seems intent on continuing in my back garden. It's time frogs got their own back.

Although this goes unmentioned in the advert, the purple blob in the background is called 'Thangar Void-Eater' and is named after a weird bloke we saw wandering round a convention one year. At the time we were bored out of our minds, suffering badly from stuck-behind-a table-madness and were passing the time by making up fantasy back-stories for the strange people that were walking around. It's probably worth saying he looked nothing like this in reality.

Pretty much the perfect way I'd like to read 2000 AD each week: in a tatty old armchair with tea and biscuits. And gin. The dog is based on Baz, my insane Paterdale Terrier. Also, I don't know if anyone will notice this but Tharg is peering over the fence in the background. I thought about having him stood behind the Squaxx with his hand on his shoulder in a paternal way, but I thought instead I'd make him leer like a sex-pest from behind a hedge. 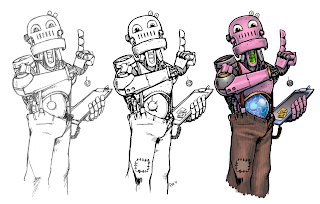 Various stages of the SalesBot character. I came up with a great pun for his name, and was gonna write it on his head, but I can't for the life of me remember it, so he stays nameless. For now let's call this pink cretin Molch-R. 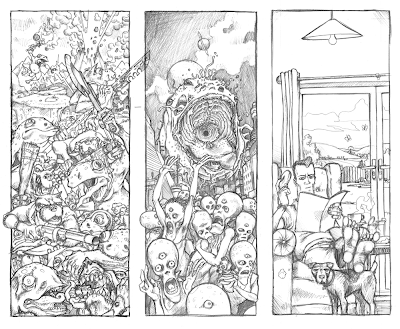 In the spirit of the advert: Click here to subscribe to 2000 AD - your species depends on you!
Posted by Pye at 21:53 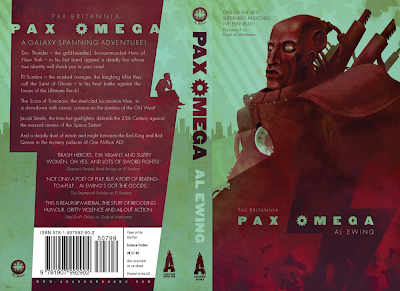 We sent Al Ewing's Pax Omega off to press this morning. Here is the final cover design and a few spreads from the interior pages, which I spent a bit longer on than I would do normally. On the cover, as well as adding in all the correct copy, I redesigned the spine, and made a ton of small adjustments to the art at the last minute (I couldn't help myself) that I doubt anyone but me will notice... 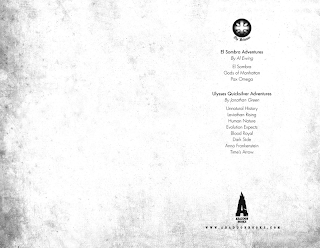 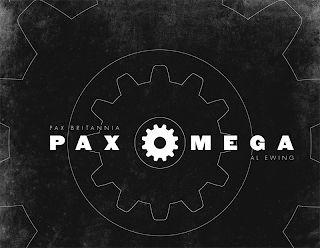 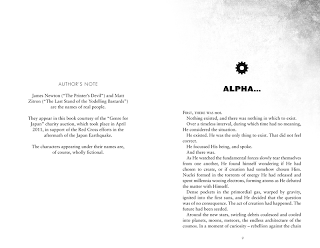 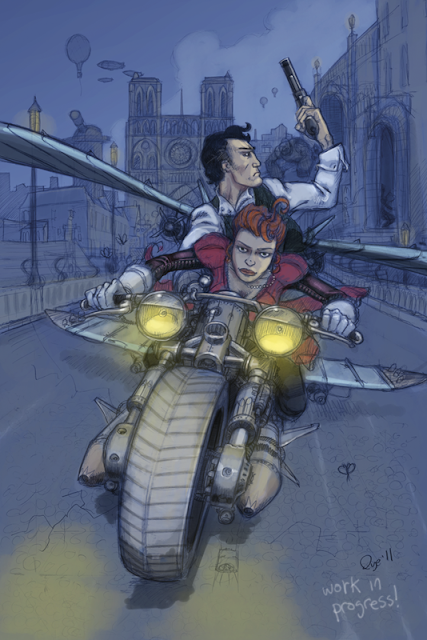 This is an ebook cover I've been working on for Abaddon, the cover for the second volume of Jon Green's Times Arrow. Above is the work-in-progress colouring, which at the moment is just the pencil drawing multiplied over a layer of colour. I'll have to go back and finish this at a later date, but I want the colours to be similar in tone to that of volume one. Below is the thumbnail I drew before starting, and the teaser design I did a while ago for the back of volume one, which owes more to the design of Pax Omega than the usual Pax Britannia style. 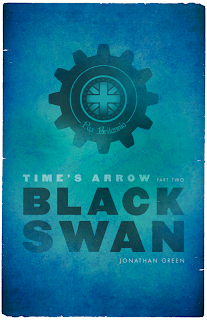 This whole project is pretty cool, and a bit of an experiment. Time's Arrow is getting published in three volumes as ebooks, and between the release of each one the readers will be able to vote for what happens in the next installment!
The first part, Times Arrow: Red Handed, is available now, and Black Swan will be on sale in a month or so.
Find out more here!
Posted by Pye at 22:14 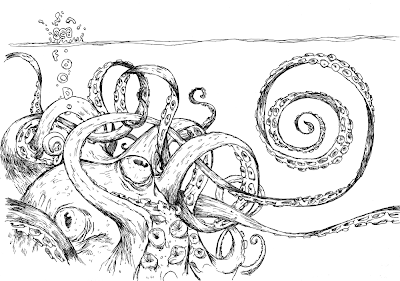 Last year Luke and I worked on several (quite varied) projects for Cab Studios. Below is a selection of some of images I produced for them. 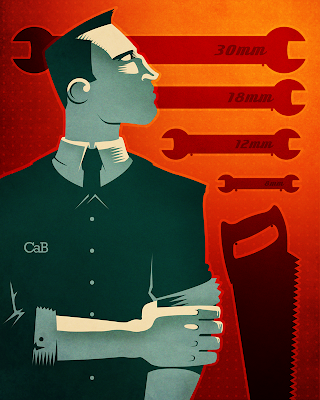 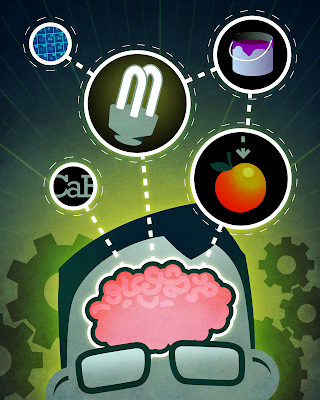 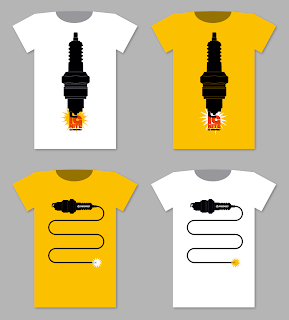 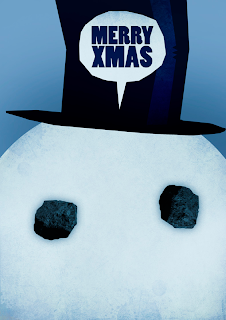 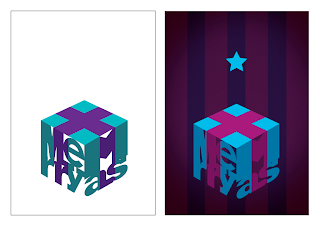 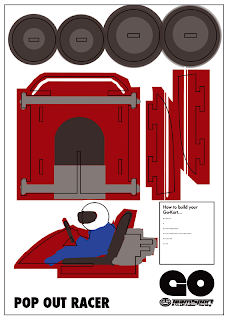 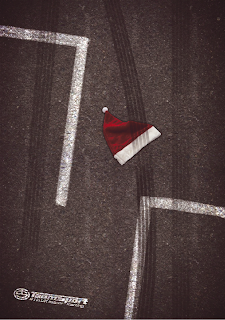