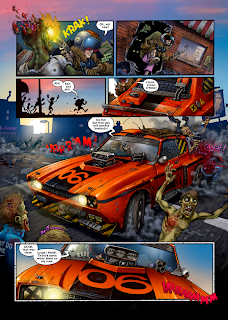 Email ThisBlogThis!Share to TwitterShare to FacebookShare to Pinterest
Labels: Blood and Plunder

The Monarchies of God 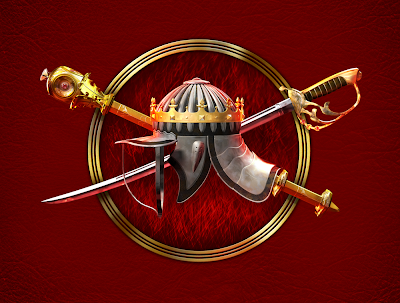 Hawkwood and the Kings
Above is the final cover art for the first volume of Paul Kearney's Monarchies of God series, published by Solaris. This collects the first 2 books in a 5 book series - Hawkwood's Voyage and The Heretic Kings. This is something that's been great to work on, as the books are really good and unlike the other covers I've done I actually got to read them before starting! The whole series has been published several times previously, and from the start Paul said he'd like the covers to be totally different from the other releases, which had a very classic fully painted fantasy look to them. Not that there's anything wrong with that of course, but he felt these should feel different. My initial roughs are shown below, based on items, weapons and equipment the characters in the book use (Corfe's/The Cathedraller's helmet, a cavalry sabre and a Ramusian religious looking mace. This was meant more to show a general idea of what I was after, rather than something to finish properly at a later date.

I think Paul thought these were OK but immediately pointed out that the helmet was far too medieval looking, and should be based on helmets from a much later period in British history. Not being an expert on this kind of thing I was pointed in the direction of a Civil War re-enactor who works in our office, Andrew Evans. Initially I was just hoping for some guidance and reference material, but Andrew also happens to be an excellent 3D artist and offered to not only help design, but also render the helmet, sabre and golden mace. He's done a superb job, and the final elements are shown below. They're far more realistic and detailed than I could have hoped to do on my own, and now that these items 'exist' I'm hoping we can use them from different angles and in proper scenes when it comes to designing advertising and promotional material for the series. 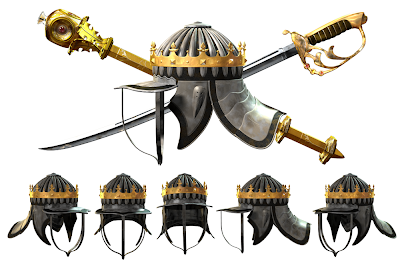 The next job was to incorporate his art into my cover design. I added them onto the background and lit the objects so they reflected the red from the behind. The whole thing looked good, but was far shorter than my initial rough so I added the twin golden rings around the elements. This helps with focus and the art now filled the space better without me having to totally redesign the text. The fur in the ring is a reference to the werewolves which play a large part of the story, and was made by scanning in a vile luminous pink acrylic cushion that my dog lies on... 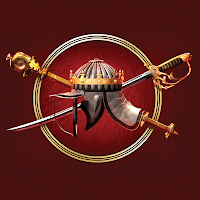 I didn't look at the cover art again for a few weeks as it was done well in advance of the deadline, but when I did (2 days before print) I found the layered photoshop file I'd made first time round had been lost/deleted from my computer! Bit of a minor disaster, and I had to re-do the bloody thing from scratch! This turned out to be a blessing in disguise as my second go at it looked much better than the first. The rings have more colour reflected in them, the fur is more defined, and I added a nice old leathery texture to the red background which followed round onto the spine and back page. The final front and back covers are below. 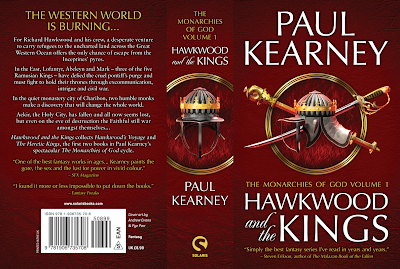 The next job was to come up with a design for the interior pages, which is normally quite easy once the cover is done, as you can use the fonts and style of the cover when finished. Myself and David Moore came up with a symbol to represent the Ramusian religion from the book for use on chapter breaks and the like. I think this religion is based loosely on Catholic church so we tried to echo that without expressly using a crucifix, and with a twin border to match the cover rings. 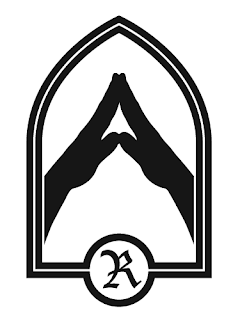 Lastly I had to redraw the staple of any fantasy series: the maps. I actually quite like the original map drawings, with their hand written text and stuff, but as we'd spent a lot of effort with the rest of the book it seemed cheap not to update these too. Plus the only versions we had of them would have been page scanned from earlier releases and would have been a bit blurry and crap. I redrew the coastlines and features as closely as possible then relettered the areas and cities using the same fonts as the cover and internal pages, then added a good inch or so onto the top and bottom of each one so they fitted the new page dimensions better. As with the symbol above I added a twin lined border to echo the cover. Original maps are on the left, updated ones are on the right. The only thing left to do now is the entirety of volume 2!

The Monarchies of God Volume 1: Hawkwood and the Kings is released August 2010 from Solaris Books.
Posted by Pye at 12:17