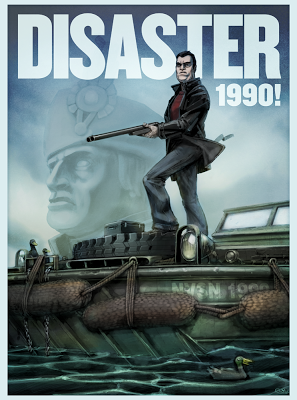 A couple of months ago Tharg asked me to come up with some new cover art for Disaster 1990!, as it was being collected up to go in the Megazine supplement comic. The previous covers were nothing special, or at least not suitable for a more modern reprint cos of old logos etc joined to the art, so I though it'd be pretty cool to do something a bit different from before. I did a ton of sketches (i'll upload them later - can't find them now), the best of which got turned into the covers for volume 1 and 2, the second of which (above) went on sale today! 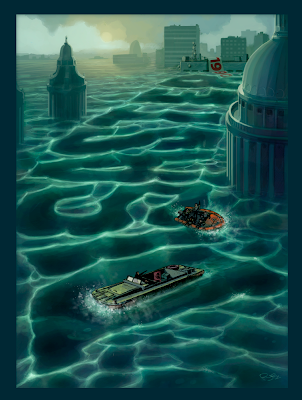 Really pleased with the idea I had for volume 1 - and its amazing how many people don't see the logo in the water! For some reason I had David Hockney's swimming pool pictures in my head when I started this, I certainly intended it to be more graphic than it is now. but I got carried away with the painting and it ended up quite illustrative.
The cover for volume 2 is a bit more straight, but I quite liked the over-the-top comparison of psychotic, no-nonsense lorry driver Bill Savage and Lord Nelson, which also helps put the whole pic out of place a bit - he's not just a badass, he's floating on water in an impossible and somewhat ridiculous position,  being stalked by killer ducks... Which hopefully says as much about the story as you need to know!
The hardest part about this pic was finding a decent reference pic for Nelson's Statue in trafalgar square that wasn't taken from the ground below! Also note the nerdy reference on the side of Bill's DUK-W, its designation is: NVSN1999 i.e. INVASION 1990 (the story that this one is a prequel to) with no vowels. I added that about 5 minutes before press deadline in a last minute flash of inspiration! 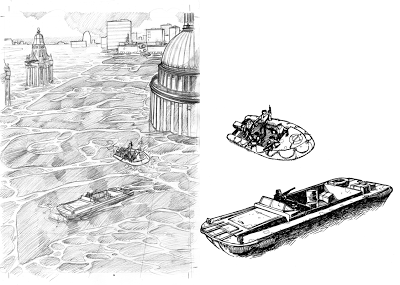 These comics are Bagged with Megazine 331 and 332 respectively - on sale now! 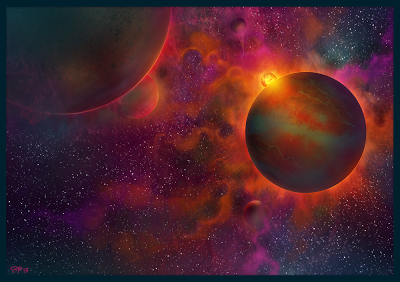 My first bit of art for 2013! Cover for the second Solaris Rising anthology edited by Ian Whates. These covers can be quite text-heavy so I laid the words and planets out together in Indesign/Illustrator before starting in Photoshop to make sure I left enough room for everything, a technique I first tried last year on the Solaris Rising 1.5 ebook. Works quite well this way, as the text really sits in and around the art. Here's the final cover, fully extextinated (yeah, it's a word): 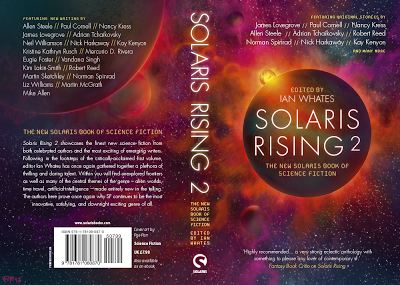 The volume 1.5 ebook cover. Really happy with the fuzzyness of this: 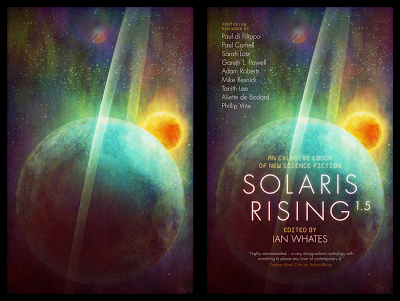 I keep thinking one day I'm gonna stick a spaceship on one of these covers. Here's a couple of roughs I tried, one slightly more in earnest than the other...

I started both images as vectors/fonts in Illustrator and Indesign to get the layouts right, before pasting all the basic shapes as separate layers into Photoshop for colour and texturing. Here's roughly the how the files started off: