The Law comes to the iPad and iPhone in the Lawman of the Future's first ever iOS game: Judge Dredd vs. Zombies!


Even though the 2000 AD Nerve Centre shares an office with the computer games side of Rebellion, I had no real knowledge (other than sneakily glancing at programmers screens whilst wandering around) of the the newly released Judge Dredd vs Zombies, up until about 3 weeks ago - and now I don't seem to have done much else!

I was approached at first to come up with an alternative icon for use on the App Store, as the version the games dudes had been using during production didn't really tell you much about the game. I think it was just a Judge's badge on a blue background or something. They wanted something very simple and very graphic that would suggest both the Dredd and zombie elements, and still be recognizable when reduced in size. The picture below is the first thing I came up with, based on the mask graphic that we use on the Judge Dredd Case Files books. 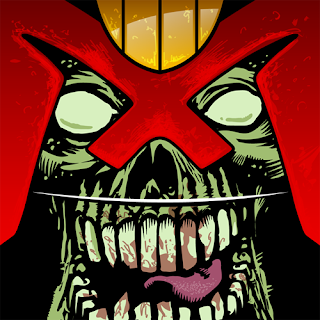 Image-wise I still think this is kinda cool, but I do agree with the feedback we received from Fuse Powered (who Rebellion were creating the game with) that it doesn't really give the impression of there being a hero in the game, or a versus element. To people not familiar with Dredd it could just be a zombie in an american football helmet or something.

It was suggested instead I do some kind of fight scene with Dredd fighting a horde of the undead. I wasn't so sure about this really - for a start Dredd facing off a horde of zombies is exactly what we were trying to avoid with the first graphic, it's not a graphic anymore its an illustration, plus the minimum size the icon would be displayed at is something like 50x50px, so it would run the risk of being completely unintelligible.

Anyway below are 3 rough pictures I did for this. The top one I spent more time over (too much really, I put loads of pointless detail into the zombie faces), before deciding that it really, really needed to be simplified. I scrapped it and quickly knocked out the other 2 pictures. I did all of these in Adobe Illustrator so it was pretty easy to rearrange the bits. 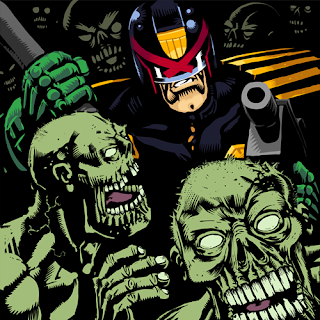 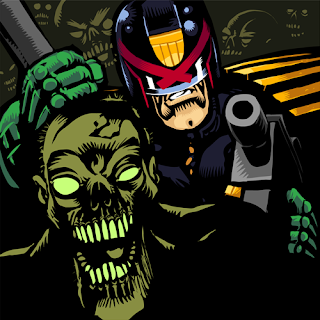 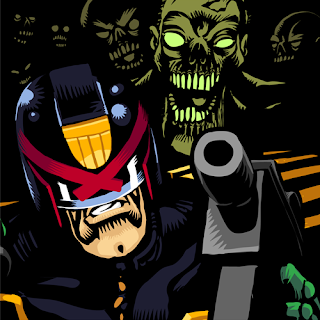 After seeing these everyone decided that although they kind of liked them as images in their own right, they were far too busy and wouldn't be very clear when reduced in size on the App Store...

At this point I did what I should have done in the first place and did a very quick page of sketches, then got everyone involved to choose a favourite. Number 5 is the one we went with. Here's the final icon: Next up is the advert I put together with some help from PR-bot Molch-R for the game that'll be in next weeks 2000 AD (Prog 1763). As I'd kind of set a style for the game at this point I ended up doing all the web banners and itunes store graphics too at the last minute! There was about 35 of them and it was right up to the wire. The game went live today I think, and I only finished them yesterday afternoon! 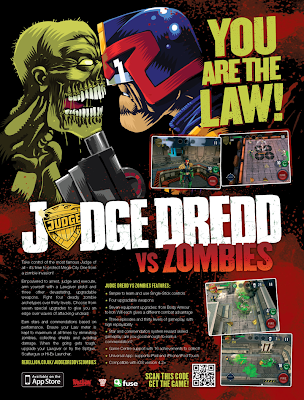 The only thing left for me now is to play the bloody game! It looks great, but I think I've played it for the grand total of about 15 seconds! If you want to have a go too, here's the link, It's only 69p too.
Would seem tight of me to ask for a complimentary copy?