Century of the Soldier 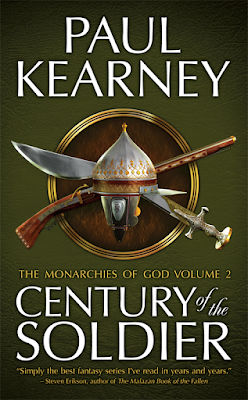 A preview of the cover for the second volume in the Monarchies of God series; Century of the Soldier. As before the 3D work for the Helmet was done by Andrew Evans, and I think it's turned out even better than the first one. The colours work really well and the gun especially looks superb! Underneath is an advert myself and Andrew put together for the Monarchies series as a whole. One of the main benefits of taking the time to make all these objects actually 'exist' is the we can do stuff like this with them without having to re-draw anything. I think it looks cool and is first appearing in Judge Dredd Megazine 301. 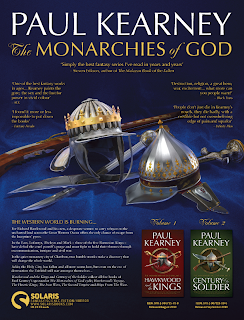 In keeping with the first book, we've updated the symbol for the chapter breaks too, this time with the symbol for the Merduk religion and its prophet Ahrimuz, which has a much more Turkish influence. Here it is:
The Monarchies of God: Century of the Soldier is released in September 2010 from Solaris Books
Posted by Pye at 13:20

Email ThisBlogThis!Share to TwitterShare to FacebookShare to Pinterest
Labels: books, Century of the Soldier, hawkwood and the kings, monarchies of god, solaris

After leaving this for the weekend and then coming back to it, I decided it wasn't working properly. I've redone the statue and added some extra lighting and rain. This is what happens when you have a long deadline and slightly too many ideas... much more pleased now though. 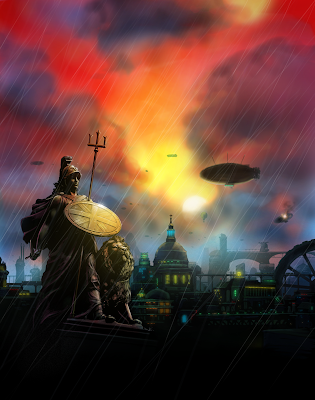